This week, as I #StayHome to avoid contracting COVID-19, I am revising the second chapter of my political memoir, which focuses on my post-activist life that started when I left Florida for grad school in 1988.

Yesterday, I wrote a very depressing post about the state of U.S. politics right now, but late last night I realized how much the current situation resembles the way things stood in the 1980s, and at least Trump is less popular than Reagan.

When I left Florida to begin a PhD program in political science at Rutgers University in 1988, the political situation was grim. The country had already endured eight years of a horrendous right-wing president, who people inexplicably loved, who had engaged in criminal activities without Congressional consequences, and who pushed the world closer to the existential threat of nuclear annihilation. 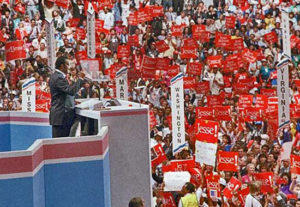 Moreover, in the face of the disastrous Reagan regime, the Democrats failed to nominate the dynamic progressive, the Rev. Jesse Jackson, opting instead for the milquetoasty Michael Dukakis who ran on competence. Consequently, it looked like the Reagan administration would continue via the election of Vice President George H.W. Bush. It appeared that even a strong left-wing political movement had been unable to stop the arms race, U.S. imperialism in Latin America, or apartheid in South Africa. Things looked dark.

Then all of a sudden, everything began to change in previously unimaginable ways. Most importantly, the Cold War ended as the Berlin Wall fell in 1989 and the Soviet Union collapsed two years later. According to scholar-activist David Cortright, “The cold war was ended not by military build-ups but by Mikhail Gorbachev’s ‘new thinking,’ which [began in 1987 and] broke decisively with the logic of militarism, and by the pressures of disarmament activism, which created a political climate conducive to arms reduction and East-West understanding…. The Soviet system collapsed when millions of citizens and human rights campaigners in the East took to the streets in the historic ‘velvet revolution’ of 1989.”[1]

In addition, the U.S. pulled away (albeit temporarily) from its attempts to impose regime change in Nicaragua, when the Nicaraguan people elected leaders who were friendlier to the U.S. in the 1990 election.[2]

And finally, the South African government suddenly released Nelson Mandela from prison in 1990; the apartheid regime began to crumble, and South Africa formed a democratic government in 1994.

As we face the disastrous Trump administration today and the DP refuses to nominate dynamic progressive Bernie Sanders, let’s hope we are, once again, on the brink of major positive change. Only this time let it be democratic socialism on the rise, not neoliberal democracy.

[2] Byrne, Iran-Contra, 336. And yet under Trump it begins again, now that the Sandanistas are back in power. See Ben Norton, “US House rams through Nicaragua regime-change bill with zero opposition,” The Gray Zone, March 12, 2020, available at https://thegrayzone.com/2020/03/12/us-house-sanctions-nicaragua/?fbclid=IwAR0Gb1m9aWONAZO2Qv8HocfUvH3judSPLKzRwyYiNly1WO-eEb_Na5O0H7w, accessed 3/16/20.