Behind My Back: Campaign Dirty Tricks Revealed!

This weekend I attended the American Political Science Association annual meeting for the first time in 5 years and shared with my friends some of my campaign experiences. 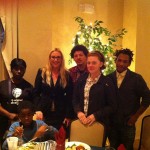 With SEIU after campaign!

One of my proudest moments of the campaign was gaining the support of SEIU. I strongly support their agenda, and they put a lot of money into my campaign. When they endorsed me, they said they would make a maximum donation, and they also ended up doing an independent expenditure, which could not be coordinated with our campaign in any way – which leads to an interesting story.

One day I went door-knocking in a relatively conservative neighborhood. When I introduced myself on the first doorstep, the woman said, “There were people here from your campaign just yesterday.” At first I had no idea what she was talking about. “Are you sure they were for me, Claire Snyder-Hall?”

I called Mikki to find out whether any volunteers had been assigned to the neighborhood. She said, “no… it must be SEIU!”

Wow, I thought, that’s exciting. They are actually sending out canvassers to support my campaign! Love those guys!!

The man at the second house also informed me that someone from my campaign had been by, but he said he was not sure he could support me. He thought I was a little too radical, based on what he had learned about me the day before. I tried to get more information about what was said, and he said, “Here. This is the information they left with me.”

He handed me a piece of paper with information about me, which included mention that I am a Jewish lesbian PhD from DC.

I was a little flummoxed, but I had to laugh. Wow, it sure is too bad I can’t coordinate with the SEIU folks because what they think is important from my bio is not what I would have emphasized, especially in this neighborhood! Oh well, there’s nothing I can do about it, since coordination is illegal.

I have told this story with a resigned chuckle for years now, but when I told it to my friend this weekend, he just looked at me and said, “Claire, you know that wasn’t SEIU.”

“It was the other side,” he informed me. “People do stuff like that all the time.”

I was stunned, absolutely stunned. When I told Mikki what my friend said, she was shocked too. It definitely could be. Certainly, SEIU canvassers would not think for a minute that “Jewish lesbian PhD from DC” should be emphasized on the doorsteps, would they?

And I’ve always wondered why the guy handed me pieces of paper instead of one of the beautiful palm cards SEIU produced for my campaign:

It might be hard for readers of this post to understand why I didn’t suspect that it could be counter-canvassers before this weekend. But I didn’t. I never ever considered that people would go door to door pretending to be my supporters, while disseminating information that would turn voters off.

Who would do such a thing? Was my opponent involved? I may be deluded but I really don’t think he would be involved with such an effort. I mean he did do a few things against me — his dog whistle yard signs most obviously, pointing out at the debate that I’m childless, and his email to supporters saying I’m not the “kind of person” who should be elected. Come on, Ernie, it’s not like I’m an adulterer or something! 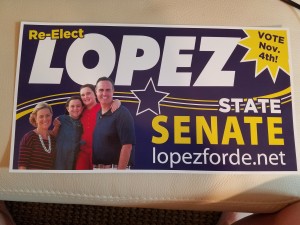 This mailer shows the family photo that was featured on his yard signs. The only two candidates that had family photos on their signs were running against non-heterosexual women.

Was it the Delaware Family Policy Council? They did a homophobic voter guide in 2012. I was surprised they did nothing against me — especially since so many people on my side insisted that two lesbians running would galvanize the right-wing. (The absurd suggestion that the homophobic contingent would be OK with one but not two lesbians running always made me laugh.)

However, DFPC probably did not attack me publicly because if they had, they would have had to disclose their donors, due to the  passage of the Delaware Elections Disclosure Act of 2012. During the 2014 campaign, they were contesting the law in court, and in 2016 the Supreme Court upheld the law. But would they organize counter-canvassers?

I was actually surprised how little bile was directed at me during the campaign by the other side. There were two woman who gay-bashed me when I was on the Susan Monday Show — both Sussex Democrats who supported my opponent — but that’s about it. (“No, I don’t have a PhD in lesbian studies…”)

My main problem was the 6-8 people within my community who badmouthed me and worked against me during the campaign. Of course I know quite a bit about what they said and did because I have a lot of friends who tell me what people say about me behind my back. but we will save that for another time.

What I don’t know is what the other side was saying about me. Ernie did not aggressively attack me, I assume because he knew he was winning and he didn’t have to go negative, which might have tarnished his nice guy brand. But on the other hand, I am sure things were said — at least among his conservative supporters.

Perhaps someone can fill me in on what my opponents said about me behind my back. It would be good to know about it for the book I’m writing.