How Gendered Is Firefighter Culture in Delaware?

Who doesn’t love fire fighters? The brave men and women who risk their lives to put out raging fires, risking painful injuries or a horrendous death for the good of others – and in Delaware they volunteer to do it.

So I was stunned to read in the Washington Post this morning that systemic misogyny exists in many fire companies, and it got so bad in Fairfax that a young woman, who gave up a promising career in IT to pursue her dream job, killed herself because of the cyberbullying, sexism, and harassment she received from her male colleagues in the Fairfax County Fire Department.

She was friends with my spouse. 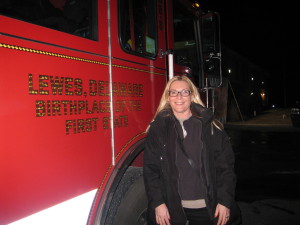 When I was running for state senate, someone informed me that “in Delaware, there are Democrats, Republicans, and Fire Departments.” I still don’t know what that means exactly, but I am sure it has something to do with an old boys’ network controlling Delaware politics — not good news for a female candidate. When I asked my informant how I could deal with that from a campaign perspective, he suggested I get involved with the ladies’ auxiliary. Hmm.

According to this morning’s article, firefighter culture, even in 2016, remains very masculinist. “William R. Metcalf, the former president of the International Association of Fire Chiefs, called firefighting a ‘white guys club.’ He said too few departments have made a substantial effort to welcome women.”

The problem is not just that the firefighting has traditionally been done by men and so they remain dominant. It is much worse than that. As Metcalf explained in an open letter to his organization’s membership in 2014, “In a surprisingly large number of fire departments … it’s OK to harass and physically assault women and minorities – even rape women – in our fire stations.”

Given that kind of culture, it should come as no surprise that in the wake of Nicole’s suicide, “Female firefighters from the highly regarded Fairfax department and others nationwide have come forward …, filing lawsuits and sharing stories that reveal festering problems with the treatment of women in the male-dominated field.”

And of course, people in charge generally do nothing about the sexist bullying – sort of like what happens in the military – except retaliate against the victims for speaking out.

I hope the fire departments in Delaware are an exception to what I read about this morning, but I have no idea, since I am not in the boys’ club or the ladies’ auxiliary. Perhaps my friends who are will share their stories with me.