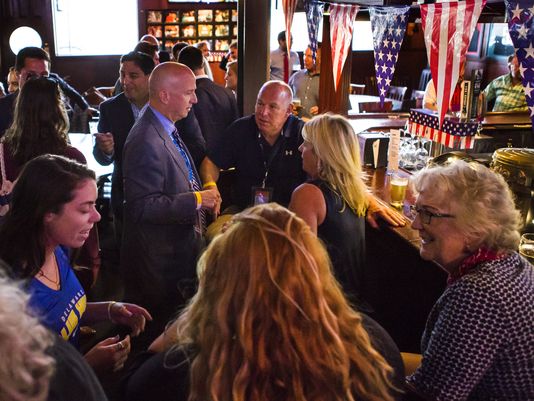 Margie Fishman recently published an expose in the News Journal of a “private” meeting that took place “behind closed doors” during the Democratic National Convention, at which “lobbyists and their well-heeled clients” treated Delaware politicians to food and an open bar — and did so in a way that allowed them to avoid disclosure.

All of the above attended a Wednesday night lobbying event hosted by 15 local sponsors, including Artesian Water, Delmarva Power, Port Contractors Inc., the Delaware and New Castle County chambers of commerce, and several attorneys and lobbying firms….

Government watchdog groups note that such gatherings are held away from public scrutiny and reinforce perceptions of “pay to play” politics that became a battle cry during the Democratic primary.

At the Delaware-centric sports bar event, sponsors pooled their contributions, eliminating the need to disclose who was in attendance. Lobbyists are required to register with the state Public Integrity Commission and report when any one client spends more than $50 for a gift or entertainment per public official. But joint sponsorships mean that individual clients pay less per person. At Chickie’s and Pete’s, the total bill was less than $75 a head.

While the fact that lobbyists hosted a party probably surprises few people, that does not make the event any less troubling. Empirical evidence shows that wealthy special interests have a disproportionate influence on legislators, yet our system of democratic government is premised on the idea that elected officials represent the will of everyday people not wealthy elites.

The News Journal article stood out because it came right on the heels of an op/ed by former Chief Justice E. Norman Veasey, reiterating his call for a ban on gifts from lobbyists to legislators. Common Cause Delaware has advocated that reform for years, but little appetite exists in Dover for such a change.

There’s nothing wrong with lobbying per se. Individuals and organizations need to let representatives know their views, and lobbyists often provide helpful information. In fact, I lobby on behalf of good government, as part of my job as director of Common Cause Delaware.

The difference is that Common Cause and similar groups don’t try to influence elected officials by giving them gifts. Recently, a long-time lobbyist gave me advice on being a successful advocate: Go to the many fundraisers held each week in Dover for elected officials and donate. I told him we don’t do that.

Perhaps that’s why there’s so little interest in democracy reform among politicians.