What To Do Next? Six Ideas for Advancing the Revolution

Tomorrow my spouse and I will join thousands of activists in Philadelphia for the DNC, and we are very excited about it. We do not have credentials to enter the Convention proper, but we will be on the streets with other everyday people who have something to say.

We expect a huge convergence of the Left in Philly, and we look forward to standing with our allies, making new friends, and building community. It’s going to be a blast with people celebrating the huge success of the Bernie Sanders campaign — for winning 22 states, 43% of the popular vote, and almost 1900 delegates, as well as raising nearly $230 million from small donors and putting democratic socialism on the agenda — and people celebrating the nomination of the first female candidate for President of the United States, Hillary Rodham Clinton.

The Nation recently asked an array of activists, “what do we need to do to build on this political revolution?” Here are my thoughts. 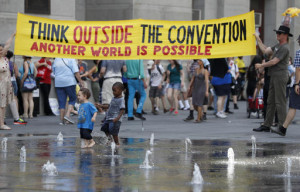 1. Continue to build our movement for social and economic justice. This underlies everything. The Bernie Sanders campaign was never just about Bernie. It was the next step in the mobilization that began in 2011 with Occupy and then grew in strength. Bernie was at the right place at the right time, but the movement continues.

The existence of a vigorous movement for social and economic justice (focusing on gender and race as well as class) is vitally important because it’s not enough to get good people elected to office. And it’s not enough to present them with facts and figures. We need a strong, principled movement, always calling them out, always pushing for more, always articulating the ideal. Without pressure from the Left, elected officials don’t have the motivation to stand up to wealthy special interests or resist the easy slide to the compromised middle. We need the voices and actions of Occupy, Black Lives Matter, Fight for 15, the Dreamers, organized labor, LGBTQ activists, climate change activists, anti-militarists, feminists, Democracy Spring, and many more. And we need to work together. 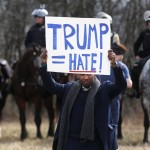 2. Fight against the rise of authoritarianism. This is critically important, and it means both mobilizing to defeat Trump, with his proto-fascist vision, and working to end the current regime of surveillance, militarism, state-authorized violence, and structural racism. 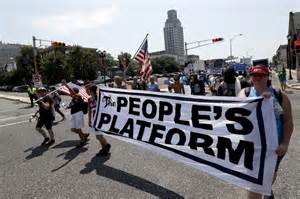 3. Strengthen democracy. We need to protect voting rights, strengthen transparency, end gerrymandering, get money out of politics, and move towards the public funding of elections. We need  to reverse the trend towards economic inequality because it undermines political equality. If we don’t do these things, then all is lost.

Particularly in the age of right-wing populism, I understand the limitations of democracy, the challenges we face when people support the wrong agenda, however, we cannot have a revolution that does not support democratic values. When the people seem incapable of governing themselves, we need to inform their discretion — or more specifically, reframe their vision, since politics is really about emotions not facts.

4. Support progressive and socialist candidates at all levels of government. Who gets elected President is vitally important, but without a Democratic House and Senate, not much will get done. We also need to understand that many important fights will take place at the state and local level. And we need to build the bench, so we have good people in the pipeline. Good people need to be encouraged to run and supported when they do.

5. Work for reform inside the Democratic Party. With the release of the DNC emails by WikiLeaks, we now know for certain that the DNC really was working against the Sanders campaign, instead of overseeing a process through which Democratic voters decide which candidate they want to represent them in November. We need to make sure that never happens again. We also need to strip super-delegates of the power to override the will of the people. If the Democratic party refuses to abide by democratic principles, we are in serious trouble.

I have to confess that I am a little skeptical of our ability to actually reform the Party from within, given the way the Party is funded, the neo-liberal orthodoxy embraced by Party leaders (see Thomas Frank and Wendy Brown),  and the desire of Party elites and their subordinates to shore up their own power. Institutions are hard to change. Who was it who said “You don’t Occupy the Democratic party; it occupies you”?

I have long advocated a left-wing takeover of the Democratic Party. However, to do that you need people who won’t drop to their knees the first time Power pushes back or trade their professed principles for “access.” In order to stand strong, (most) people need support, and this is where a strong social movement is necessary — to articulate a principled moral vision and long-term strategic plan, enable progressives to see the political terrain clearly, and embolden them to resist personal and institutional bullying.

6. Put pressure on President Clinton from the Left. We also need to exert constant pressure on Hillary and all Democrats in office to make them do the right thing. We cannot afford to withhold criticism, like we did too often during the Obama administration. We need the equivalent of a Tea Party on the Left  — unwavering on principle and willing to primary DINOs — if we really want to transform the party and move the Left forward. As FDR famously said, “I agree with you, I want to do it. Now make me do it!”

7. Walk in love. The means are the ends.