Thomas Frank on the Democratic Party and Delaware — Excerpts from “Listen, Liberal”

The following is an excerpt from Thomas Frank, Listen, Liberal or What Ever Happened to the Party of the People? (New York: Metropolitan Books, 2016).

‘One of the reasons that inequality has probably gone up in our society is that people are being treated closer to the way that they’re supposed to be treated.’

“If our goal is to rescue the reputation of a hero who turned out to have clay feet, this is surely the way to go. Ocean liners are hard to turn. Presidents don’t have a lot of power. Republicans are in league with the devil.

“If what we are concerned with is inequality, however, it would behoove us to admit the obvious forthrightly: that Obama could have done many things differently, that the Republicans aren’t superhumans, and that the presidency is in fact a powerful office….

“Let us return to the financial crisis and the Wall Street bailouts — the episode that will define our politics for generations…. To say Obama fumbled this most critical issue is to understate the matter pretty dramatically…. It was fully within Obama’s power to react to the financial crisis in a more aggressive and appropriate way; laws were in place, there was ample precedent, he wasn’t forced to pick the men whom Democrat Stephen Byron Dorgan plaintively called ‘the wrong people’ for his economic team….

“It would have been good policy … [and] it would have been massively popular had Obama swung the wheel of the ocean liner and reacted to the financial crisis in a more aggressive and appropriate way….

“There were countless opportunities for the kind of decisive action I am describing: Obama could have questioned or even unwound Bush’s bailouts; he could have fired the bad regulators who let it all happen; he could have stopped the AIG bonuses instead of having his team go on television to defend them; he could have pushed to allow bankruptcy judges to modify mortgages; he could have put the ‘zombie banks’ into receivership; he could have shifted FBI agents back to white-collar crime; and so on.

“Obama did none of it…. It wasn’t because the ocean liner would have been too hard to turn, or because those silly idealists were unrealistic; it was because [Obama and his team] didn’t want to do those things….

“In the early days of the Obama administration, … there was a healthy Ivy League delegation in the executive branch; as the years went on, the administration grew even more selective, even more closely focused on professional status as it is defined by a tiny group of institutions. As of this writing, fully two-thirds of President Obama’s cabinet-level officers are products of these elite schools; all but three of them have graduate degrees….

“All these brilliant people, all these honored professionals and Ivy League PhDs, and yet one of the most striking features of the Obama administration has been its timidity, its leaden lack of originality. The situation in 2009 called for daring and imagination, but what we got were half-measures in all things….

“Professional correctness also fetched the Obama administration a beating in the arena of partisan combat. In their guileless search for Grand Bargains and bipartisan comity, it seems never to have dawned on Team D that their Republican opponents might do exactly what Newt Gingrich and Tom DeLay taught them to do in the 1990s: dedicate themselves completely to obstruction, drag the conversation always to the right, and refuse to confer even the slightest bit of legitimacy on the Democratic administration. Failing to guess that this extremely likely eventuality might come to pass cost our pack of geniuses many months of wasted time as they fruitlessly pursued Republican votes for their health care bill….

“When you press the Democrats on their uninspiring deeds — their lousy free trade deals, for example, or their incomprehensible Wall Street reform legislation — when you press them on any of these things, they reply automatically that this is the best anyone could have done. After all, they had to deal with those awful Republicans, and those awful Republicans wouldn’t let the really good stuff get through. They filibustered in the Senate. They gerrymandered in the congressional districts. And, besides, it’s hard to turn an ocean liner. Surely you don’t think the tepid-to-lukewarm things Clinton and Obama have done in Washington really represent the fiery Democratic soul.

“So let’s go to a place that does. Let us choose a locale where Democratic rule is virtually unopposed, a  place where Republican obstruction and sabotage cannot taint the experiment. [Let’s start with Rhode Island and Chicago]…

“This is a curious pattern, is it not? Blue-state Democrats with transparent connections to high finance, who have deliberately antagonized public employees, and whose chief economic proposal has to do with promoting ‘innovation,’ a grand and promising idea that remains susupiciously vague. None of them can claim that their hands were forced by Republicans. They came up with this program all on their own…. 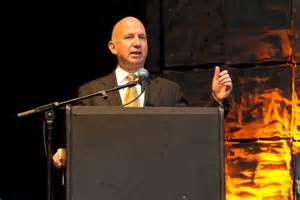 “There is also a version that comes from sky-blue Delaware, where Democratic governor Jack Markell — a man much beloved of the East Coast banking and telecom communities — has tried to privatize the Port of Wilmington, has done battle with public workers, and had fashioned a role for himself as an info-age thought-leader. Toward the end of 2004, Markell travelled to Stanford University, the center of the knowledge economy, to speak about ‘Disruptive Innovation,’ meaning, in that case, web-based companies that displace an existing personal service. The question before policymakers like him, Markell said … was ‘how we can facilitate the success of these innovations.’ He further wondered how Delawareans might ‘switch our schools’ in order to produce the kind of workforce that innovative companies want and even how they might consult with the ‘business community to make curricula relevant.’

“If you think this is about bowing down before the One Percent, you’ve got Markell all wrong. Writing for the Atlantic magazine a few months after his Stanford speech, he called on American to recognize ‘the synergy, rather than the contradiction, between economic growth and economic justice.’ What he means is that economic justice only comes about through economic growth, and therefore the primary duty of anyone who wants to tackle inequality is ‘to create a nurturing environment where business leaders and entrepreneurs want to locate and expand.”

And here is my take-away: The “really smart” people in Democratic administrations see more education as the solution to all our problems. But we need economic justice not more credentialing. Every single person is entitled to a decent life. The poor are not getting what they “deserve” for not achieving academically. They are getting what is imposed upon them by an unjust order that rewards the 1% and immiserates those at the bottom.